These days many people seem to be longing for normality. Dreaming about “normal times”, a lot of people may ask: “When will everything go back to normal again?”. This desire for normality brought several other questions to my mind, which I want to elaborate on: What is normality? Has it been “normal” before the COVID-19 pandemic? Do we really want to go back to this so-called normality?

“Normal” or “normality” for me holds a great problematic potential. Isn’t it highly subjective what “normal” is? Or at least it is relative to the subjectivity of a group. But in its use “normal” implicates somewhat of an objectivity around things described that way, while there is none. Often “normal” too is understood as a certain average or common ground. I myself would like to exchange the word “normal” by “healthy”, which is indeed as well a subjective term. But: I think it isn’t implicitly linked to universality or objectivity. And if we would start asking the same questions we used to ask by using the words “normal” or “normality” and replace them with “healthy” or “health” these questions would turn into quite different questions, as well as their possible answers. Questions like “When will everything go back to normal again?” or “What can we do to restore our old, familiar normality?” become questions like “What does a healthy society look like?”, “What does a healthy world look like?” or “What has to be done/what can we do to achieve a healthier life/society/world?”.

On the one hand and without doubt this global crisis is a tragedy in so many ways and I don’t want to dismiss this. On the other hand it is also an opportunity for us as people to evolve into a healthier community/society. But to be honest, I’m really worried about the world letting this opportunity pass – more than about the virus itself at times. We’ve seen things work out nobody would have believed before, we’ve seen potential we stopped believing in. We’ve been witnesses of how forgiving the world and its nature can be – like dolphins returning near the coast of Sardinia, clear water in the canals of Venice or the vanishing smog which hovered the big cities, now offering a clear view of the blue sky and so on – if we acted more consciously and empathically. So, making excuses has become much more difficult.

This crisis is an opportunity to grow, it’s a wake-up-call. It’s a time to reevaluate life and how we treat ourselves, each other and the planet we’re allowed to call home. Humans work in a way that constantly seeks the familiar. The familiar serves the human pursuit of safety. We want the familiar, because it suggests safety. However, familiarity doesn’t necessarily mean safety, health or to lead a good life. We need to reflect on what we are used to and reevaluate its worth and meaning! There’s a shift in our thinking necessary: We may need to let go of the familiar – let go of things that have been passed down from generation to generation – to find the authentic, healthy way of life.

Longing for the old times – for “normality” – is a step backwards, a step in the wrong direction or even more a non-step, a stop. We’ve been given a chance to grow beyond ourselves, to outgrow our conditioning, to start living more consciously and to not settle for the familiar “normality”. So let’s not miss this chance. Let’s not try to restore the status quo. Let’s do better! 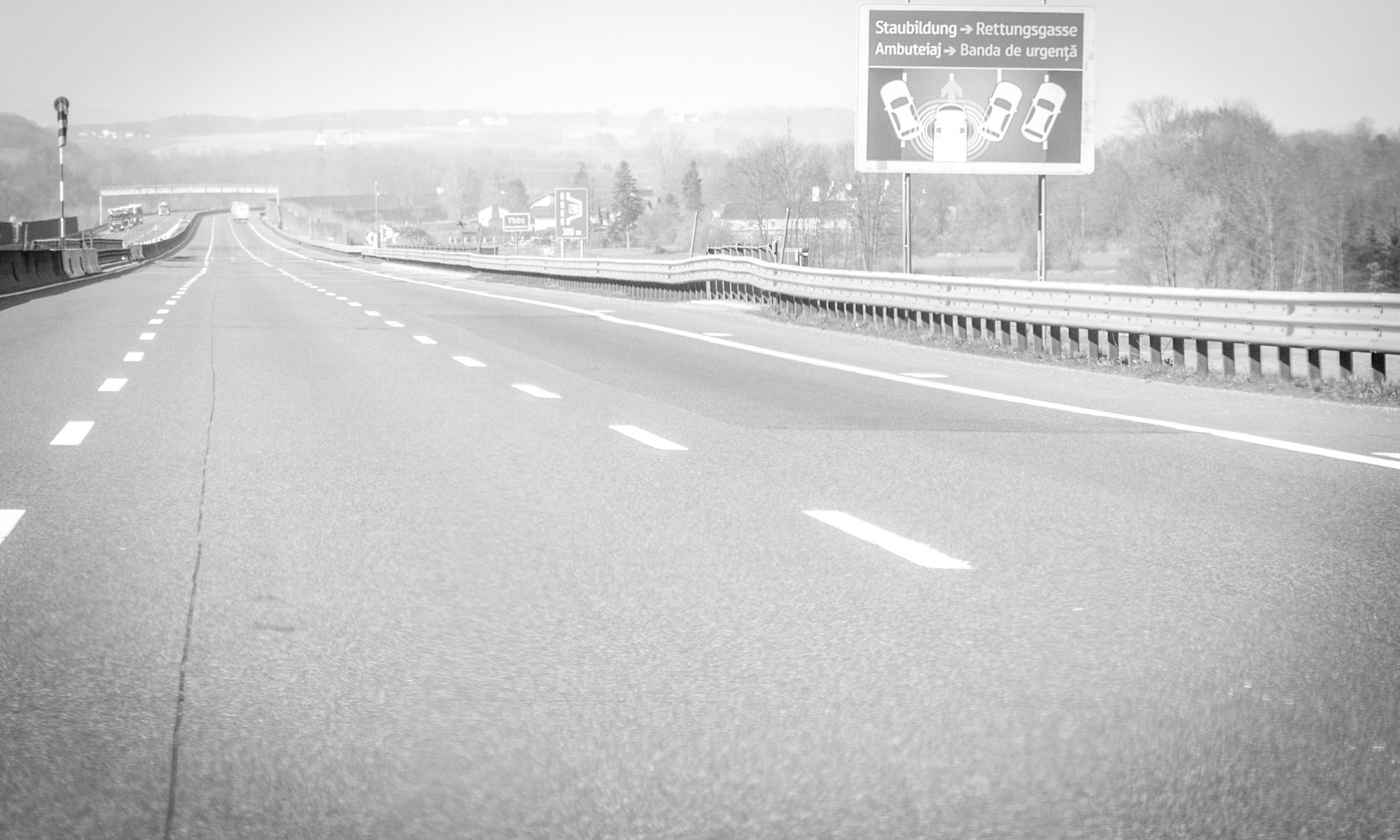 Whether the unit is length or time, these days keeping sufficient distance constrains us. “Keep at least 2 seconds safety distance from other cars” and “keep at least 1 meter distance from other humans” they say. The former rule already existed when the corona virus was released into our world, the latter results from it. Sometimes it seems we have a problem with these rules – we obviously like closeness. All the more we are hit by the latest development that obliges us to stay at home.

Driving certainly is a different experience these days. Trucks mainly use the roads, but hardly any vehicle can enjoy the spacial freedom now available – our personal freedom suffers tremendously. Today the government announced that we must wear masks when shopping, which seems to be a necessary step in controlling the corona virus outbreak but changing our lives in so many ways.

People try to maintain closeness by increasing the use of social media. Phone, Skype, WhatsApp, Telegram, Facebook, Youtube, Instagram, Twitter, e-mail and internet providers are more important than ever. Life challenges us by not being able to continue our daily routine, but we are humans, clever in finding new ways and possibilities.

It’d be great if we could learn from the current situation and if we embrace and take advantage of the opportunities the corona virus opens up. For example, to minimize individual traffic by thoroughly rethinking our behavior in this regard. Do we absolutely need to take our car to get here and there? Must we reduce the time of travel? Do we have to maximize our comfort?